These last few months have been pretty busy for me. Besides the day job that forces me to work under two assumed names, I have worked alongside two projects.

WHO WANTS TO BE A CULT LEADER?

My good friends Phil and Cindy, who work on Cram Magazine with me, have created a card game based on their interests in the modern skeptic movement popularized by Carl Sagan and others. The premise of the game is that the player takes the role of a cult leader, and has to gather the most power through numbers of followers and renown. I jumped into the production, serving duties as the writer of the story and world the aforementioned followers are a part of. I don’t want to get into many details as I am writing my process on the Cram Games blog (yep, we’re keeping the brand name). There is a more detailed take on my role in my first post. 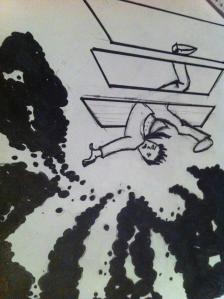 After, I don’t know, years of talking and coming up with ideas, my friend Rob and I have taken the first steps into making our own webcomic series, Transfrequency.

The simple synopsis is that it is a story about two friends stuck traveling through universes after a freak accident where one of them attempts to see his girlfriend via a exportation device. It came from an old idea we came up with when we were making strips about ourselves back in our college days. We took ourselves out of the equation and took the original idea of multiverses and make, I’m not going to lie,  a pop-culture blowout. Kirby dots, Civil War robots, mysterious travelers, are parts of what will mostly likely become just a parody/love letter to all the genre stuff we’ve both grown up with.

The website is still clunky, so I won’t bother putting up the link yet, but Rob is drawing and I’ve stopped re-editing and just straight-up write the damn scripts that needed to be written.

That’s all I can say at the moment. I’ll start putting down some of the research for Transfrequency from time to time on the main blog. Now, back to the grind.