I went to the fourth edition of the Outside Lands Music and Art Festival held in Golden Gate Park from August 12 to 14 . Since its inaugural  opening in 2008, a good 60,000 people a day come into the the park .I went to all three days, and despite the insane hike and Muni rides reminiscent of the images you see of Indian trains ( I saw one teenager holding on the outside of a  joint between two cars. I’ve yet to find any reports on a death, so good job crazy Muse fan), they were all memorable.

Day one started with  the The Joy Formidable, a Welsh rock trio who released their first album, The Big Roar, in 2011 after releasing their EP four years ago.

Ritzy Bryan is the lead singer and guitarist on the group. The takeaway from the previous sentence is the word guitarist, as she is a beast on it. Her solos on songs like “Austere” was a surprise to me. I’ve been a fan of the band since their 2008 EP, and to see her tear on a guitar, pulling off Jimmy Hendrix styled riffs on the floor was amazing. The way she jumped around in her red dress, occasionally slamming her hand on the cymbal of drummer Matt Thomas – who performed admirably  throughout their set-  was a image that stuck in my head for the rest of the day.

For those that needed to kill time between sets,  there were a few options. The Barbary tent had soul acts, sideshow antics, and Gallagher smashing watermelons. The other was a small domed dance tent. Now for those that have gone to a domed IMAX theaters like the one in the Liberty Science Center in NJ, The idea for the lights show was similar. 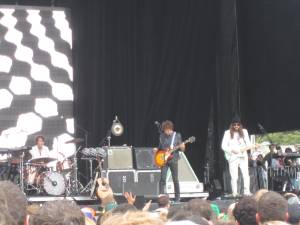 Next on the agenda was MGMT  performing on the main stage. While pushing through massive crowds at festivals is a standard, dealing with a commune of middle-aged Phish fans laying on blankets they most likely put down the moment they got into the festival was something new to me. Once past the hippie minefield, I found a decent spot and enjoyed the performance, particularly Andrew VanWyngarden’s voice. The one issue was when VanWyngarden switched out of his electric and into his acoustic guitar to play songs from Congratulations, which was a lackluster album at best. 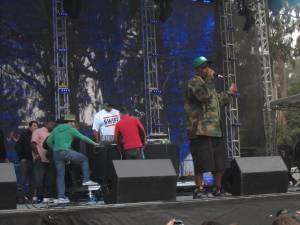 After a stretch of those songs, the need to see Sir Luscious Left Foot himself  superseded waiting through the rest of MGMT’s set. By now, the news his cancellation is spread over the internet. There were a few highlights however. Catching the tail end of Ellie Goulding’s performance piqued my interest in hearing more of her work. The only thing that’s come to my attention from her before seeing her live was this mash-up of her song “Lights” with an orchestral cover of Kanye’s “All Of The Lights”: 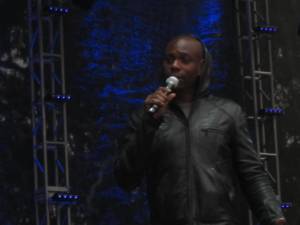 A good hour and a half into the crowd staring at the crack tech crew huddled around DJ Swiff’s malfunctioning MacBook Pro, San Francisco’s friendly neighborhood comic, Dave Chappelle, got on stage to ease the tension. This was the highlight of his appearance:

The last part of note from the Big Boi affair was a personal one. At the 45 minute mark I started feeling someone caressing my back and rubbing against me. I turn around and see a long-haired woman behind me with her eyes half-open, leaned back like if she was practicing for a limbo contest. Her hands were in grope mode; she started touching my cheek and chest and grinding on me. No one else was dancing, and her moves didn’t fit to the songs from the speakers (Blonde Redhead was playing from them at the time).

I tried ignoring her and turned around towards the stage, which I knew wouldn’t lead to anything since it’s hard for me to keep my cool when a woman rubs herself on me. So, as the people surrounding us laughed and cheered, I started grinding back, leaning to her angle.  This continued for a few minutes before she moved to my left and swayed away forwards into the crowd. I’ve done the dance maneuver to get by a cute girl or stubborn bro in the past, but she was a professional. as soon as she disappeared, I shouted to the people around me, “Fuck it, I got mine.”

One thought on “Down By The Golden Gate Pt. 1”