My father picked me up in the winter of 2004 from the office where I worked as a telemarketer during my senior year at high school. My boss found me sitting down unconscious against the wall of the bathroom — my last memory was of washing my hands and face.

My mother told me a story about something that happened to me back in the old house in Lima. My late uncle Paco found me standing up behind the couch in the living room, catatonic and ice-cold. He called my mother over, who immediately wrapped me in blankets and rubbed me down. ” In that hour you were staring off into space,”  she said, “I’ve always wondered where your mind was going.” I was two when this occurred, so I don’t remember any of this. I didn’t think there was any relationship  between  the Lima event and  the office one. I know better now. The kink in the right hemisphere of my brain might have made my brain go haywire when I was a toddler. It just took nineteen years to show me what really happened that night in Lima.

One of the many reasons I hate Walmart stores is, aside from my normal gripes with the mega-chain, is that I was in one when I started feeling the symptoms of what would later be described to me as an “aura.” It’s a warming, prickly sensation on the top of your head that precedes a seizure or migraine. I was in Rochester buying groceries with Gwen and by the time we left the store, a pain had flared up deep within my right nostril and spread all over the right side of my head. I’d had similar migraines in the past, but I knew this one felt…different. The pain was persistent where the others were throbbing – it  felt like it was in the deepest parts of my brain instead of that general dull pain on the exteriors of it. I drank some water, which only exacerbated the growing pain.”I’m gonna take a nap,” I told her, and lay down on the bed.

I woke up in a level of disorientation completely unknown to me. I could only hear two things — the sound of the EMTs telling me I had a seizure and Gwen sniffling while talking to me through her cracked voice. There is a vague memory of seeing her face, eyes red and worried as all hell. Half an hour later, after a cold ambulance ride, I was lying down on a hospital bed, still disoriented. The doctor grilled Gwen about any drug use, using every tactic my father uses when he wanted more information from a patient. I laughed, which probably made the doctors suspicion of drug use even higher. Then, the fun part started — a nurse moved me on  my left side and impaled me straight in the vertebra for that lovely lumbar puncture, then a battery of blood tests, EEGs, MRI scans, etc. I don’t have any problems with tests and checkups, but it was that I wasn’t particularly lucid made it trying this time.

For days, I laid in the hospital bed in a haze. Gwen slept in the bed with me one night, which was the only time I felt normal in the month afterwards. My parents came to take me back to New Jersey. At home, I felt like I could fit in as an extra for a movie as a drugged up mental patient. The NJ neurologist prescribed a new MRI scan – I needed a new one because the first one was in reverse, which made it impossible to know what happened. She showed my father and me what they had found: a cortical dysplasia on the right parietal lobe. Cliff’s Notes version: There’s an abnormality from when I was still in the womb right around the spot that controls tactile functions like processing the senses and spatial awareness.

From the time of the seizure until my move to California, I remained seizure-free. However, I would need to be on anticonvulsants for at least two years just to make sure it was a one-time attack. The neurologist I saw at UMDNJ advised me that the first medication I was on were not as effective and would increase my weight gain. Instead, she prescribed these incredibly small twenty-five milligram pills to take one-hundred milligrams a day. They easily fell out of my hands, which made me feel like a crack fiend searching for that elusive rock every time I’d drop some. Despite their size, they were effective. One little side effect affected me drastically. The medication affected my thyroid in such a way that I lost my appetite. There were days that I only remembered to eat something when I would see Gwen have dinner – even after cooking the food myself. I forced myself to eat out of common sense. Because of the inevitable weight loss, I dropped thirty pounds in the scope of four months, sitting on my ass in front of a computer. It’s a strange feeling to hear compliments of looking better when, in fact, I wasn’t.

October 2009 brought a one-two punch: Gwen lost her job in a massive layoff, and I started having unexpected goose bumps on my left arm. It was too warm in the Bay Area to have goose bumps, and it was only on my left side, which was strange. I just brushed it off as panic attacks due to the fear of the two of us being unemployed, but even after we both got jobs, the attacks continued.

I called them “shivers” because at first, it felt like one, but it slowly became something else. I would space out, lose seconds of memory. I would lose my sense of direction and walk indiscriminately around the apartment or while out – that last thing would scare the crap out of Gwen when we walked around the city out of fear of me walking aimlessly into an intersection. My senses and awareness went haywire – which perfectly matched the symptoms I mentioned earlier.

I tried my best to keep it together despite my fear.  I was doing some manual labor late at night for a crappy retail store for a month and a half, and there were many times during an attack that I’d walk away from what I was doing so that I wouldn’t hurt myself or someone else. When I moved up to a comfortable office job, I told my boss about my condition as a precaution if I would black out during conversation — that happened quite a bit, sadly. Both my bosses were great guys about my condition. They had no problems with my routine doctor visits without using my PTO. Still, it kept me at a distance with coworkers.

By September of 2010, I had an average of six attacks daily. The pills were pointless, but I was still on them, mostly because I thought it would get worse if I wasn’t on anything. When I finally had health insurance, I asked my (now third) neurologist for an MRI. This time, however, something new appeared — white spots showed up all over my brain. When I hung up the phone after the doctor called to tell me, I paced around the house in panic. I called my parents to explain the situation. I stood outside my townhouse, waiting for Gwen to get out of work so I could tell her the moment she got out of her car.

I went through the routine again — lumbar puncture, EEG, another MRI. I also had Gwen record videos of the attacks for the neurologist to see. I still have them on a disk somewhere – not that I need to watch them again, those videos are stuck in my head now. The spots didn’t show up again, but at that point I couldn’t shake that feeling that I was going to have a full-blown attack at any moment. By Christmastime, my attacks increased from six to ten. Any moment I had one, I had to go to Gwen or someone else to hold onto. Close friends had already started noticing or admitting to seeing my attacks.  I went out with friends one night a few days before New Year’s, but left early because I just couldn’t function. I finally broke down and cried that night.

I lost weight again, this time from depression. The neurologist prescribed new medication. Like the previous one, it had no effect, and added the wonderful side effect of irritability and bouts of rage. He prescribed new ones, along with a different type of test — an ambulatory EEG. Imagine walking out of a hospital with sensors glued to your head – hair and all –wrapped in gauze. With a head as large as mine, I looked like that head-wrapped bounty hunter next to Boba Fett in The Empire Strikes Back. I jokingly said I was going to take photos of it but I didn’t out of self-consciousness.

Something interesting did happen while I was an EEG mummy, though – I wasn’t having as many attacks. I had six attacks in the two days I had that thing strapped to my head– a forty percent drop of my normal rate. I even tried to force myself to have more just so that the neurologist can get more data –I know that’s stupid, but if you were in my place, you might have done the same for the sake of your health.

So, apparently, the new drugs just started kicking in. The rate dropped so fast that a month after that last EEG I stopped having seizures altogether. I wasn’t afraid of what would happen when I would leave the house. When I would wake up in the middle of the night, it was because Gwen was pushing me off the bed as she is wont to do, and not because I had a full-blown attack at four in the morning. I had a couple of odd days, but when I upped the dosage, I never had an attack again. I still haven’t. 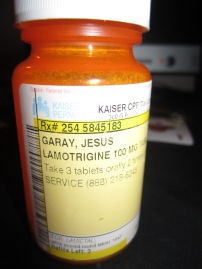 This is what I take every day – 600 milligrams a day, three pills in the morning, and three at night. I’ve had no side effects from it. In fact, those suffering from manic-depressive disorder s use this to extend times between episodes – the joke I tell everyone now is that I’m on antidepressants as well.  My other option is surgery. That wouldn’t be as dangerous as you think it’d be, according to the neurologist, but after the last few years I had, I didn’t want any more stress. That, and the fact that they’d have to keep me awake to stick a hose up my nose, pump me with contrast liquid, and run an MRI to find the exact location of the lesion didn’t quite sit well with me.

It’s been a few days over three years since I had that first attack. Sometimes I still get worried any time I shiver or get goose bumps from the cold. I always remind myself of the time when I broke my knee in high school. It took me a good four years to stop worrying about messing up my leg. It’s only been a little over ten months since the last attack. It’s going to be a while before I catch up to the other twenty-six since the first one. Who knows, a year from now I won’t even have to tell this damn story again.