I had been to smaller conventions before – The Nova Albion Steampunk Exhibition in 2011 and PAX East this year, but New York Comic-Con was the first time I almost felt overwhelmed going through crowds of  cosplayers, garden-variety geeks, and bewildered parents of tween Homestruck fans (which I honestly don’t get, or maybe I really am old). I didn’t really take in the full con at first due to working on Thursday and my Friday was severely cut from an immense pain in my feet from a beforehand walking from the New York Public Library down to Union Square in a “team-building” exercise for work.

I did manage to get a primary target out of the way on Friday despite the pain. I wanted to get my copies of Pax Romana and The Nightly News signed by Jonathan Hickman, the writer/artist  of the books. For those that don’t know, both are indie graphic novels in which the former’s premise answered the question of what history would be like if the Middle Ages had never happened, and the latter involves terrorists against the media. Hickman’s current run on Fantastic Four was pretty good as well, seeing as you know, actually got me to read FF comics for the first time without tossing them back into a bin somewhere.

Excuse my blown-out Jersey Shore-esque hair, it was cold in the city and the hat-hair produced the messed-up blowout.

When it was my time to speak to him, I told Hickman as he signed my books  that his run on Fantastic Four was the first time I had ever cared about them.

I had my friend Phil take a photo of me with Hickman.

Oh, one more Friday photo of note is that of  writer/artist and Kabuki creator David Mack. 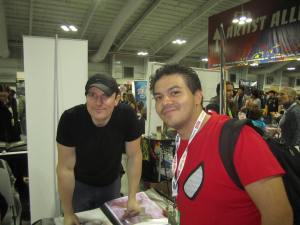 I took this photo just to annoy one of my close (and huge Mack fanboy) friend. Sidenote: Kabuki is really really good.

Saturday was the true slog, however.   I had convinced to take my mother, sister, and brother-in-law around the convention to their first huge convention. I had no internet/phone service from the moment I got within yards of the Jacob Javits Center, and after finding all of them more than an hour later, I lost them in the first fifteen to twenty minutes of walking around with them. I knew it would be pointless to find them in the crowd, so I walked around until more of my friends showed up. From there on out I walked around, taking photos of cosplayers. Here are some of the greatest hits from the entire con: 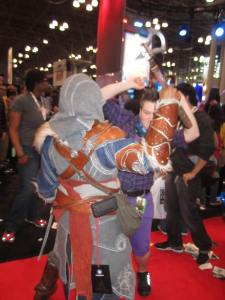 Apparently Connor from the upcoming Assassin’s Creed 3 loves dancing to Rihanna. Who knew? 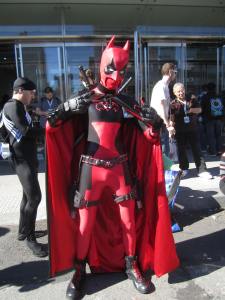 There were many mash-ups of Deadpool, but this one was the best one by far. 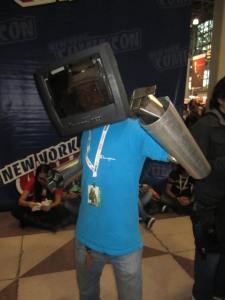 I wonder if his brows really hurt by the end of the event.

Not gonna lie, I wanted to steal this. 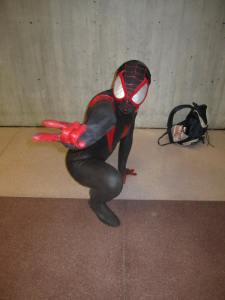 This guy was doing this tribal/tai chi dance number. Yeah. 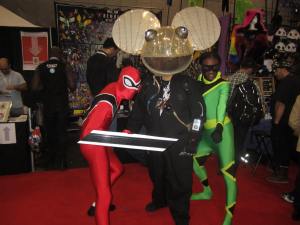 There was a lot of variations of the Deadmau5 helmet. There was a cool Spider-Man and Deadpool, but I went with the most original one. 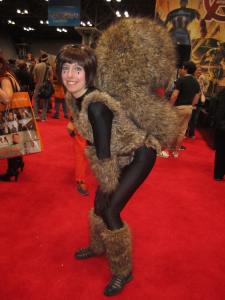 Wouldn’t be right to not put up a Squirrel Girl pic.

Fuck yeah Fallout cosplay. The Railway Rifle in his hand is the best weapon ever.

This dude was on some serious Jonathan Frakes level.

Black Panther up in this beeyotch.

Most of the Doctor Who cosplay (and holy crap was there a lot) stayed on the Tenth and Eleventh Doctor. It was cool to see cosplay from the older eras.

While on the Doctor Who tip… 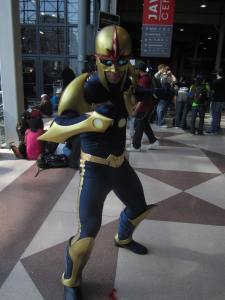 What Would Nova Do? Answer: suck horribly at Marvel trivia.

This was radio-controlled, which was sweet. 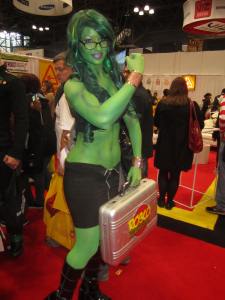 I think my brother’s recent traffic violation issues would have gone smoother if she was his lawyer.

The above photo is a good segue for an interesting part of my con experience. I am fascinated with the steampunk scene. I used to own these great goggles but I lost them in the move back to Jersey. I saw this old man from Michigan selling them at a reasonable price (as if there is a reasonable price for gear of that sort) which included magnifier glasses. Phil said something that proved to be correct: ladies love cool goggles: 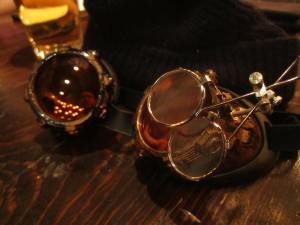 No seriously, the girls really did love ’em.

To be a complete attention whore about my new gear, I kept them on my head. even when I left the con to get food. I had a female tourist sitting outside a restaurant ask about them, and I had a group of women staring at me the entire time I was at a nearby dive bar. I wasn’t in the mood to start a conversation, however. The real test of the theory though? Her: 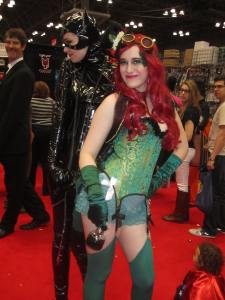 She politely complimented me on my goggles after I took this photo. That pretty much validated the purchase.

My final (and probably most important) target of the convention happened on the final day. I wanted to meet Phonogram and current Journey Into Mystery writer Kieron Gillen. To put it simply, Gillen is one of my new heroes. Gamer writer (he founded Rock Paper Shotgun), music geek on a level I’ve never been to (seriously, read the original and see just how much Britpop you really know), and apparently pretty solid at conventional comics seeing as the line in the 3:00-4:00 time frame comprised entirely of his fans, mostly young teenage girls obsessed with his Journey Into Mystery run. I normally like to chat with people in line, but seeing as I along with my associate Rob were probably a good ten years older than the people behind and in front of us, we both kept quiet.

I had brought two things for him to sign: one was a trade of his short run on the quickly cancelled SWORD from Marvel, and his sequel to the original Phonogram, The Singles Club. When it was my time to speak, I had put the SWORD trade on top.  I slid them over to him and said:

“I bought the first one to keep the Marvel thing going but..”

I then slid it over to show the Phonogram trade. He smiled and did that British thing where they tip the side of their nose. I went off and told him that Phonogram was my Velvet Underground (to understand that, there’s this old anecdote that the first VU album did not do well financially, but it helped inspire and start many bands) in that he helped validate some of my old ideas of the connection between music and magic.  I also told him he stole my idea of using TV On The Radio’s “Wolf Like Me” as a story title and premise. He told me that the same thing had happened to him, only that it was Alan Moore of Watchmen and V for Vendetta fame that took it.

“I took that as compliment,” he said. After that, he asked me if I’m still writing, which is very much the case. He signed my copy with the words “WRITE!!!” and “Music=Magic”, which is the tag of the entire Phonogram series. Rob took this photo of me with Gillen:

Afterwards, I walked around and bought more random stuff in the name of consumerism and went home. Overall, I had a blast. Can’t wait for next years. 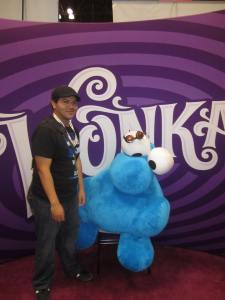 Yep, finally found a way to show people what I am.

One thought on “My NYCC 2012: Signings, Cosplay, and Goggles”