Many fans have seen a particular type of Trent Reznor live show in the past when Nine Inch Nails, specifically when you consider ones such as the Lights In The Sky tour. That show had an impressive visual aesthetic, with Reznor and the band in a LED cage producing a variety of visual insanity. The lights and media experience of the How To Destroy Angels show from last night at the Wellmont Theater in Montclair, NJ was a different beast altogether.

The silhouettes of the four members of the collective (with longtime NIN collaborator Alessandro Cortini on backup sound duties) appeared behind a fiber-optic installation that served as the foreground to the visuals controlled in real-time by Rob Sheridan, shifting from art director duties behind the scenes for NIN to performing onstage as part of the group. In a sense, Sheridan was the primal source of power of the whole show. Through his computer equipment he produced spinning isometric shapes and streams of color that came down the fiber-optic wires in ways that were very reminiscent at time of The Matrix. The band’s very attire served as an easel to the electronic spectacle – they all wore a very uncharacteristic white that made all the fans in the crowd wearing black band t-shirts look out-of-place.

Reznor played a more subdued role in comparison to singer/wife Mariqueen Maandig Reznor. She commanded the stage, swaying in her white gown in a way that gave her the appearance of a specter hidden behind the strings. At times the fiber veil retracted and she came out, re-materializing into the scene. One moment in particular was during her performance of “Ice Age” that was so emotion-wrenching she made a few pauses to hold back her tears. On the other side, when the veil moved back in its original position she pushed through its fibers violently as she screamed during “Welcome Oblivion”. Her range of soft melody to industrial shouts showed the difference in the band’s sound in comparison to that of Nine Inch Nails – the unrelenting sound of the latter replaced by an ethereal harshness of the former. 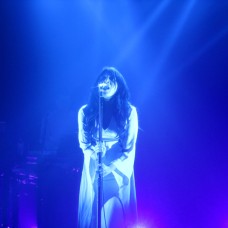