I made it a point to wait until a few issues before I posted anything on this comic. I of course, am thoroughly enjoying it as I have all Gillen/McKelvie joints, and this modern pantheon drama hits many things, simultaneously, that I will perhaps go into detail in future posts. For the time being, here is a small ramble. 1-2-3-4.

Godhood is a violent prospect. The life/death cycle, avatar-esque nature of deities across all mythologies (Greek, Egyptian, Mesosamerican, etc.) come down to one thing – the wonder is as bloody as it is holy.  There is the primordial chaos of Tiamat, the fratricide of Cronos and his children, and Odin ripping an eye out for wisdom.  It makes sense that the cold open of The Wicked + The Divine is a destructive one. It is a modern creation myth, an Enûma Eliš of sorts, not because Gillen and Mckelvie are making modern versions of dragons and monsters but because they want to let you know this is how it will be. In the faces of the four Jazz-Age young gods – resolute, nonchalant, excited, and hesitant – they prepare for a cataclysmic end. It is a small microcosm of what will come to pass in all stories. The light of creation does not come peacefully in Gillen/McKelvie’s story, but in fire and destruction. This is also true in Ananke’s transformation of Lucifer . If Laura were to become a god at some point during the series, which is doubtful,  her transformation will be just as rough.

And honestly,  how bad is the construction of your modern gods – your cherished musicians, artists and writers? Consider the myriad abuse, drugs, poverty and mental difficulties. Consider that Philip K. Dick was constantly broke, paranoid, and had hallucinatory episodes. You have Van Gogh, of course, along with Basquiat who even with all his fame in life still had a crippling heroin addiction. The concept of the life/death of the WicDiv gods is an interesting 27 Club of sorts that will be interesting to see unfold as the story progresses.

The millennial updates of the gods in WicDiv is intriguing to me from many points, one of them my lapsed South American Catholic one. Latin American Catholicism is a mix of saints with orishas, relics mixed with the roots of the land. Even witchcraft has connection to the cross.  My connection vis-à-vis WicDiv  comes through the Lord of Lies, The Adversary, Apollyon, The Lightbringer, etc. etc. Lucifer is a very powerful character to Catholics – even my brother, who also does not follow the faith as much anymore, has a tattoo of the devil getting his ass kicked by St. Michael the Archangel. 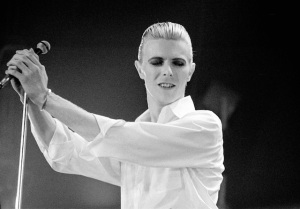 One must wonder in the world of the comic what would be on the backs of her followers when they take off their white suits. Would it be a giant graphic of the morning star sigil, or will it be Luci standing in a pose similar to Bowie in his Thin White Duke era, grinning as she stands over a dead angel in the pits of hell? If you were a follower of Luci, what would be tattooed on yours? That simple morningstar, perhaps an unchained Lucifer from an idea you came up with in the middle of a coke binge one night? If it was a theoretical me, given that my shift comes from recovering Catholic to believer in a sartorial sinful goddess, my tat would be…well, I don’t know. It will come to me in time.

The Morrigan/Baphomet scene feeds all those parts of your body when you go into an underground show. There were two shows I had been to that came to mind when I read that scene. The first was in a warehouse in New Jersey where a DJ was playing house music and a man put up sheet rock as a makeshift bar/lounge. The drinks were horrible of course but the crowd was fun. As always, things ended abruptly the moment red-and-blue lights made their appearance from the windows outside. The second show was a more peculiar setting – a Chinatown dim sum restaurant closed for the night – but the DJ was more exciting. Crystal Castle’s Alice Glass was headlining, and of course everyone was sweating out their water/booze/drugs in anticipation for her to come out. And when she did it was well worth it.

Those two moments fit Baphomet and Morrigan. Baphomet is that dingy warehouse, the pounding music as energy leading to something ominous. While getting caught by the five-o is not as dire as death-by-phantasms, the prospect still gets your heart racing as you make your way past decades-old rebar and crumbling brick. Morrigan is seeing Glass jump over the knobs and sound system to stand over the crowd (took a photo of it here on a crappy phone camera), becoming the lord as she always does at a show lit only by tea candles and two party lights. A dark goddess playing whatever the hell she wanted, everyone thinking she was perfect, and the crowd loving every second of it. 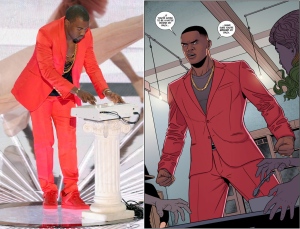 So 2010 was a fun year for music for me. Two of my favorite albums were Kanye West’s My Beautiful Dark Twisted Fantasy  and Daft Punk’s Tron: Legacy  score. WicDiv’s  Baal and Woden are avatars of my 2010 music love. Baal’s red suit and the mural in its Michelangelo-esque glory – which was an amazing synthesis of McKelvie and Nathan Fairbairn –  is undeniably  MBDTF-era Kanye.

As for Woden, not only is he wearing a Guy-Manuel de Homnem-inspired helmet, but the rest of his suit and that of his valkyrie come straight from The Grid. All he is missing is a light-cycle in that panel to really seal the image. This continues with the rest of the gods. Amaterasu’s aesthetic is in full Florence Welch, flame-red hair and long gowns suiting her. Baphomet mirrors an early Andrew Eldritch, shirtless and wearing a black leather jacket and sunglasses just like in the “This Corrosion” music video:

The Morrigan is a three-part goddess all connected to her Celtic roots, but the primary one is a Kate Bush/Lorde ultra-goth hybrid of the dark. Sekhmet appears to have a Sky Ferreira/Grimes look to her. The most enigmatic of all is Ananke, who has no easy or modern pop cultural frame of reference to work with. She is necessity personified, sure, but I imagine from an aesthetic perspective what was necessary to make her.

As the story progresses I think I may come up with more WicDiv posts. For the time being, I’ll continue counting, and snapping, and counting and snapping…